Sometimes, it may make sense to create a few separate invoices for a customer in a billing cycle. Maybe this month you provided ongoing managed services (one invoice), but also completed a special one-time project this month (another invoice) and also want to separate out any hourly overage charges (another invoice).

Even if you have only one customer who needs separated invoices in a given billing period, this can be tedious, time consuming, and easy to mess up, to say the least. Imagine how much more complicated this gets with two, five, a dozen or more customers!

By simply setting a Purchase Order Number for each contract, the entire process is simple, straight forward, efficient, and much less prone to errors.

The person performing the Approve & Post operations doesn’t need to know what items should be separated onto their own invoices. Instead, they just Approve & Post as usual and Autotask splits the items onto separate invoices automatically.

The power behind this trick really shows itself when you have to use several Autotask contracts to represent a single signed customer agreement. Maybe your customer pays for managed services and buys block hours each month (in which case you would create an Autotask recurring services contract and a block hours contract), or maybe a server installation project is flat-rate for part of the project but hourly for the other parts of the contract.

Simply enter the same purchase order number into all the related Autotask contracts, and the items for each of the contracts will be combined into a single invoice.

Do you have any customers for whom you need to create multiple invoices in a month? Will you be using purchase order numbers to separate your Autotask invoices?

I’d love to hear from you! Leave me a comment below.

Let’s say that your remote monitoring and management (RMM) system throws an alert for an offline server every afternoon. The alert is for the same server every day, and you simply haven’t had time to figure out what is causing the server to be overloaded and appear offline so consistently. Now, let’s also say that each time the server goes offline, you get a new ticket in Autotask for the server being offline. After a few weeks, you’ll have a bunch of tickets for the same issue. Chances are, two engineers on your team have unknowingly been working on the issue, albeit from two different tickets, and neither knows that the other is working on the issue. How can you more effectively track the root issue (the fact that the server keeps going offline) as well as all the instances of that issue (the ticket from today, and from yesterday, and the day before) without clogging up your ticket system? How do your engineers know what ticket to work on to fix the root issue? 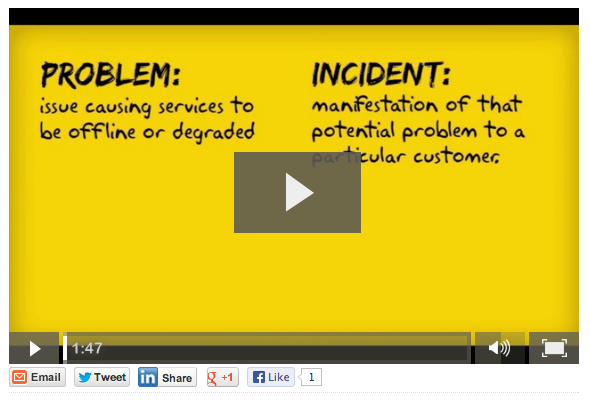 Autotask’s Service Desk module now includes ITIL-inspired “problem management” features. This allows you to associate multiple related tickets. I’m convinced that this will help your team be more effective when blasting away issues that sparked a wildfire tickets.

With the new features, some tickets become “problems”, others “incidents”, yet others remain “service requests”. Understanding the terminology is really important to effectively working with this set of features.

Have a quick watch, then rest easy. END_OF_DOCUMENT_TOKEN_TO_BE_REPLACED Continue reading 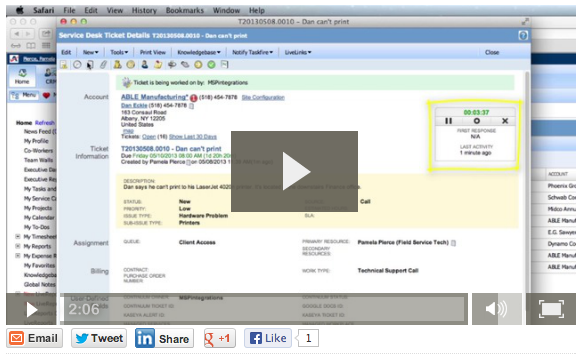 No, the ticket stopwatch isn’t a waste of time. In fact, I think it’s awesome.

But, when there’s a quick video to help you learn about it in 2 minutes, then figuring it out on your own is a waste of time.

The newest release of Autotask includes a rad new feature they’re calling the “Ticket Stopwatch”. It allows you to keep track of exactly how long you spend working tickets for customers, and you don’t have to remember to open a Time Entry screen before you start working!

The feature is elegant, simple, and effective. In this very short 2-minute video, I’ll quickly show you the key points you need to know to adopt it quickly and easily into your own workflow.

Please give it a quick watch and then leave me a comment (below) and tell me what you think. Thanks!

Now watch, go, and be free!

END_OF_DOCUMENT_TOKEN_TO_BE_REPLACED

It is no exaggeration that Travis knows the inner workings of Autotask better than almost any Autotask employee. If you need Autotask to perform a specialized function or connect to another program, Travis should be your first choice to make it happen.

From the beginning of the “Autotask Community” Travis has been an integral community persona for providing feedback and extremely useful tools and guidance to everyone using Autotask.

There are thousands of Autotask users and subscribers, however, in delving through all the conversations, solutions and blogs you’ll find Travis tends to focus on providing answers and solutions to so many of the users, issues and request generated from the community.

Travis’ eternally and realistically optimistic view keeps me motivated during projects. Where I can’t see an end in sight, Travis breaks it down into manageable tasks AND keeps people excited!

I’ve worked with a LOT of Autotask users and consultants. Travis’ skills are unmatched. He can make Autotask do things that other MSP’s have been struggling to figure out.

I don’t know of any other resource in our industry who has the expertise and field experience that Travis has.

Travis was able to bridge the gap for me between other PSA’s and the possibilities in Autotask. Without his assistance I would have been helpless. Specifically how to create reports in AT to help determine Contract Profitability across all contracts in one simple view.

I have known Travis for more than 4 years now and in that time his direct influence has aided us in growing the business by more than 20%.

If one of my clients just purchased AT, Travis would be the first place I would send them. No sense going through a 6 month learning curve when Travis can get you there in 2 weeks!

If I hadn’t had Travis as a resource my ability to determine profitability using AutoTask would have been severely limited and ultimately left me blind to what was really happening with our Managed Services contracts.

Travis has demonstrated that with the Autotask API, he can make the platform so much more powerful than it is on its own. A great example of this, and his vision, is his Email2AT service.

He recognized the power of integrating an email parser directly with Autotask via the API long before anyone else did.